What is the ideal length of a video?.

Many theories about the ideal duration of a web video bloom today on the internet and very often the question is asked … Does my video have to be less than 60 seconds? Should it go beyond the 30-second limit or should it be limited to 87 seconds or more?

Actually, these assumptions all refer to the behavior of a “classical” audience, whereas this has evolved greatly in recent years. A study by Microsoft has recently taught us that the average attention span of an audience would be today 8 seconds … It is questionable (especially since the average was 12 seconds in the year 2000), but understandable.

Today, the eye of the viewer is constantly solicited by an unimaginable amount of online content (social networks, information sites, notifications, emails …). This hubbub of information obliges him to quickly make the sort and finally, to take only what suits him.

But then … should a video last so long?
Of course not.

Let’s quickly take a look at the most successful videos in Belgium today (at the time of writing). It is true that YouTube is absolutely not a reference in terms of video quality and that this list mixes all types of video content, but it emerges that among this Top 10, the shortest video lasts 31 seconds and that the longest is … 18 minutes and 54 seconds long.

Beyond the fact that this little check does not advance us much, it confirms a truth, the kind of truth that allows us here to make a superb transition to the next paragraph …

Yes, there are two trends:

1. The short video enthusiasts (about 30 seconds)

2. The school of “everything is relative” (of which we are a part).

Opting for a short video?

Actually, the reasons do not seem so bad.

It seems that 85% of an audience watches a video until its end if it lasts less than 30 seconds. Its potential for sharing is also boosted since 92% of people have seen a video until the end, sharing on social networks. Sharing always has its importance because, by sharing a video, a viewer becomes the prescriber of the message and all the persons targeted by its sharing are more attentive.

However, in 30 seconds, we really have very little time to clearly present a product or to introduce a service.

But then, when will we choose to use a video of less than 30 seconds?

Opting for a longer video?

The other trend is not based on the free time left to the viewer, but on his interest. Regardless of the duration, if the subject of a video is relevant, the message will be listened to to the end.

Video host Wistia recently made a study analyzing the link between the length of a video and the attention of an audience (also called “engagement”) of more than 560,000 videos. Their question was extremely simple: does the viewer take into account the duration when watching a video?

The starting point was that viewers watching a one-minute video outnumber a 2-minute video. But if you add 1 minute more to a 1 one-minute long video, the impact on the audience will be greater than adding 1 minute to a ten)minutes video.

So they expected to get an exponential curve, just like this: 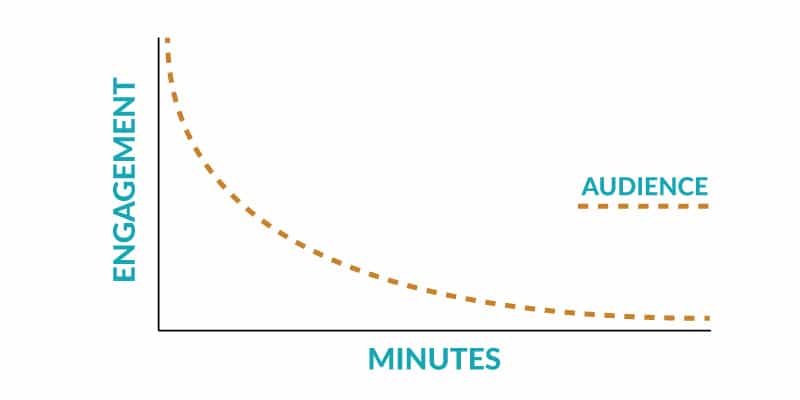 Yet the graph that emerges from their study indicates a completely different behavior. These are more levels that are crossed… 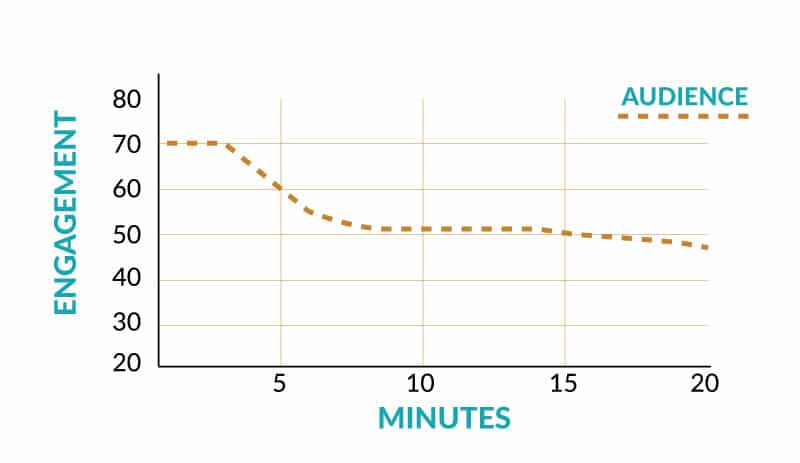 So no matter how long a video lasts, success depends on the content of the video and how it is processed.

Would everything be linked to the interest in content?

Much of it, yes. The duration of a video is therefore not chosen at first glance and you must define your marketing objectives at the base (notoriety, conversion, referencing …) and then use the following magic formula:

Should time be set aside completely?

Absolutely not, duration is not a criterion that must be completely forgotten.

When creating a video, it is about composing with shots and sequences that all have specific goals. If they are unnecessary to the message, they must be deleted. It is as simple as that and it is in this logic that we can affirm that the duration of a video should always be as short as possible.

Now, if it’s possible to stay below 2 minutes, it’s ideal.

In addition, certain visual information can have an impact on the actions of the viewers: a video of 59 seconds will always be more attractive than a video of 1 minute (a little like psychological prices: 0.99 € or 3 € 99cts) . And by clicking on “play”, it’s also getting closer to the “share” click…

Always keep in mind that a video is one way to get a message across. No message is the same, so what works for one will not necessarily work with the other.

Moreover, as you may have noticed, we did not talked about the issue of the communication channel: the behavior of a viewer on Facebook is not identical to the viewer on your own website or onYouTube.

Other criteria such as referencing can still be addressed in future articles. But if, in general, we were to summarize the success of a video to a single element, it would be that of the content, the one that pushes to brainstorm and to be creative … And that’s what we love to do.